Today, I have created a recipe that I’m certain I’ll still be making when I’m a grandmother. I call it Revell’s Food Cake, and it will change your life. I promise.
I created this recipe from two different components: a base cake recipe and a frosting recipe. I chose to make cupcakes to send with Sam to school tomorrow. You might say I’m trying to make his fellow coaches like him by giving them delicious baked goods. You might be right.  I began by looking for a red velvet cake recipe because Maypearl’s school colors are red and black. However, I got sidetracked by this incredible recipe posted on Kevin & Amanda’s Recipes called Brownie Batter Chocolate Fudge Cupcakes.  This particular recipe got amazing reviews. It’s basically a cake base with a brownie center and chocolate frosting.
Everyone who knows me should be aware how insane I get for chocolate, but even I was a little nervous about the amount of chocolate in this recipe. It seemed a little overwhelming. I wanted a cupcake that I could eat without feeling like praying for forgiveness. However, I was very attracted to the frosting. It seemed like exactly what I needed: thick, gooey, and rich. The original recipe called for five sticks of butter! Five! I cut my recipe down to four sticks, but still. I should probably start praying. I cut down my recipe by one-fifths because sticks of butter are sold in groups of four. That’s why the measurements will be a little strange. You can find the original recipe on Kevin and Amanda’s Blog.
For the base cake, I remembered a recipe I’ve been meaning to try for a while now: Hershey’s Black Magic Cake. It’s a recipe that’s been floating around for decades. Originally, Hershey printed a version of it on their cocoa tins (back when their cocoa came in tins). I found this version on a blog called My Baking Addiction. It’s called Black Magic for a reason… It’s incredibly moist and feels completely evil. It’s soft and fluffy, just the way I like my cake.
With a little tweaking here and there, I combined the two recipes to make Revell’s Food Cake. It will probably make an appearance at a party or family gathering in the near future.

2. Stir together sugar, flour, cocoa, baking soda, baking powder and salt in a large bowl (the bowl of your mixer works best). Add eggs, buttermilk, coffee (hot), oil, and vanilla; beat on medium speed of mixer 2 minutes (batter will be thin and slightly bubbly from the hot coffee). Pour batter evenly into prepared pans. If making cupcakes, only fill the cups 2/3 of the way full.

3. Bake 30 to 35 minutes for round pans, 35 to 40 minutes for rectangular pan, or 15-20 minutes for cupcakes. Test with a toothpick or fork poked into the center. If it comes out clean, they’re done!

4. Let cool for 30 minutes. Use wire cooling racks if you have them.

While the cupcakes or cakes are baking and cooling, wash out your mixer bowl and start on the frosting.

1. Melt chocolate chips in the microwave, stirring well every 30 seconds. Allow to cool for 5-10 mins.

2. Combine butter, sugar, cocoa, and salt in your mixer bowl with a large spoon. Attach the bowl to your mixer and add the corn syrup and vanilla. Mix on medium speed until just combined; don’t over-mix! It will have a strange consistency at first because of the syrup. Add the melted chocolate and mix until smooth.

3. Refrigerate for 30 minutes. By then the cupcakes should be completely cool and ready to frost. Enjoy!

Are they good? Here’s what Sam had to say:

Here is what this recipe looks like as a full cake!  :)

Ignore the strange glow from my computer screen.

What do you think? Cancel reply 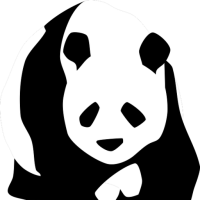