Recently, a graphic has been floating around the internet discussing a cat’s decision making. I love this graphic because it shows cats’ complete disregard for anything important to humans.  Continuing the theme from yesterday, Rigby (our faithfully cute chinchilla) not only shares traits with dogs, but also with cats… and maybe parrots, according to the above picture.

Set aside the next hour or so, because dog-shaming.com is so funny you won’t be able to stop reading the posts!

On this site, people submit pictures of their dogs being “shamed” by something they’ve done.  They write their dogs’ mistakes on notecards with the dogs in the background.  Most of them are very cute and relatable.

Well, we don’t have a dog… But we do have a chinchilla named Rigby who can be very mischievous sometimes.  I think if there was a Chinchilla Shaming website, he could easily have the first entry.

Meet Rigby. Last Spring, Sam and I decided to buy a pet because I was getting lonely during the day and wanted some company around the house. He was student teaching at the time, and his supervising teacher had a chinchilla named Oscar in her classroom. Sam came home talking about how cute he was, and the next thing I knew I was sending an email to a breeder in Midland.

Two months later, Rigby was ready to come home. He was so tiny and fluffy! I fell in love right away. The first time I lost him in the house sent me into tears for hours. He’s sneaky and ornery and completely adorable.

Right now he’s learning simple commands for treats. He’s pretty darn smart for a little fluffball. As far as pets go, he’s great. We love him even though he loves chewing on Xbox controllers (something Sam loves) and old books (something I love). That says a lot right there.

Also, chinchillas are the closest you can get to actually owning a Pokemon, so there’s that, too. :) 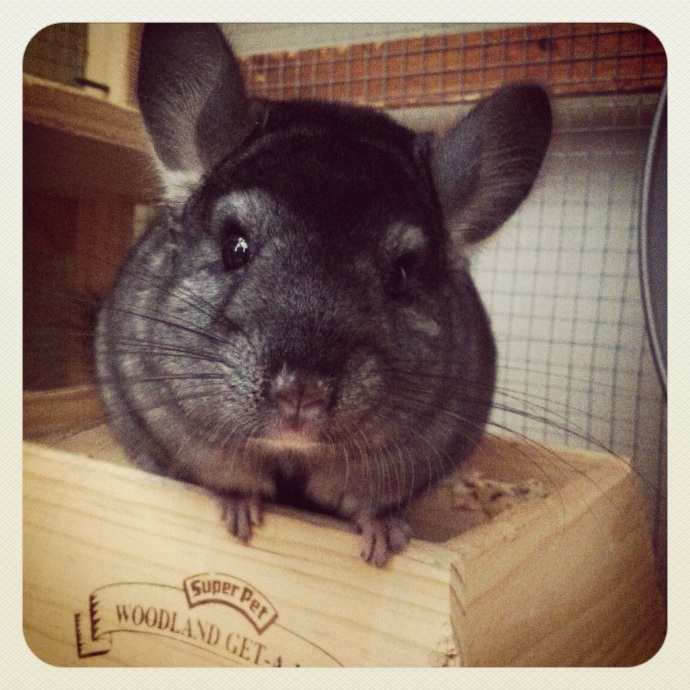